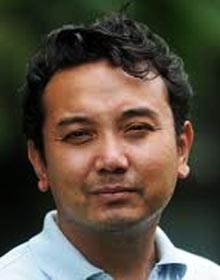 
Tsering Rhitar Sherpa (born 1968) is a Nepalese filmmaker and screenwriter.His first film, Mukundo: Mask of Desire, was Nepal's official entry for Oscars.Sherpa was born in Nepal "to a Nepalese Sherpa father and a Tibetan origin mother."After completing his Bachelor's degree at Delhi University, he studied filmmaking at the Jamia Millia Islamia in Delhi from 1992 to 1993.