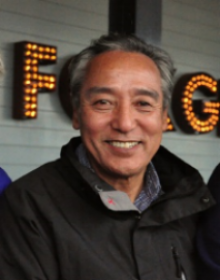 
Lhakpa Norbu Sherpa is a forester and environmentalist who is transforming into a dedicated cultural activist. Lhakpa Norbu Sherpa, Ph.D., was born  in a  mixed farming family belonging to the Traktho Clan in the remote village of Thameteng in Solukhumbu District, Nepal. His parent herded yaks, grew potato and bartered salt. In 1963, Lhakpa Norbu received the opportunity to go to school when Sir Edmund Hillary opened the first school in his village. He studied national park management in New Zealand and joined the Government of Nepal to become a Park Warden in 1980. While with the government he spent twenty years planning, developing and managing protected areas in Nepal.

He completed a Master Degree in Forest Resources under a Fulbright scholarship in 1988. He became the first person from Sherpa community to receive a doctoral degree when he completed a Ph. D in 1999 from the University of Washington, USA. He joined The Mountain Institute in 2000 to work in the Tibet Autonomous Region ( China ) as an International Expert and assisted with environmental capacity building, rural development and cultural restoration in the Qomolangma Nature Preserve. Presently, he is working as a Director of the Himalayan Program of the Mountain Institute. He is current focus is on conserving mountain environment and culture particularly endangered language. He has also produced a Sherpa language dictionary and a documentary film on Beyul: the hidden valleys of the Himalaya.