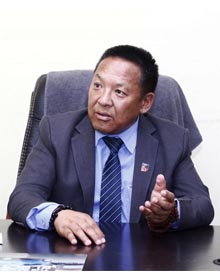 Karma Tsering Sherpa is the present President of All Nepal Football Association ( ANFA ). He was born in June 30th, 1969. He is also the president of Himalayan Sherpa Club an "A" division club in Nepal.
What ever issue he has raised during the time of election, he has been fulfilling step by step but obstacles and hurdles are always there. He had also mentioned that with the help of capable ANFA representative, it won't be difficult for them to work for the betterment of ANFA. During in tenure of one year, he has been focusing on the organizational structure, grassroots program, techinal and pratical parts etc.
It is not an overnight success to take Nepalese Football to next level but major steps has been implemented and has started. Grassroot Traning program has been strongly moving forward, Football stadium are being developed, the national team squad like u15,u16,u18, u23 football team has been participating in various international games. Also, newly introduced Nepal Futsal National team participated in the tournament recently. The result of the participation has been better than before. Gaining experience playing with strong sided team in the second round of international games are itself a beginning of the growth of Nepalese football.
Even women participation in football has been increasing. The Nepalese National women team to participate in national and international level has been one of the achievement that he is satisfied about. During his tenure of one year, Women technical center has been established which is Nepal First Women Technical center in history of Nepal. The untouched worked of Techical Center in different district for more than 10 years has been started and almost ready.
Sherpa's main objective is to create an environment favourable for development of football with good programs and FIFA's actions in the past have created a strong ground for that. He has worked very hard and hope he can transform ANFA into a corruption-free organization. The first year has been a good start and we wish him a very good luck for coming three years.