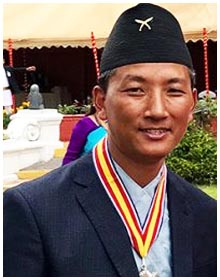 
Pemba Tenzing Sherpa is 38 years old sherpa painting contractor who lives in Vail,Colorado, USA.He was born and raised in a "Cheplung" a small Village in Khumbu Everest region. He started his job as a Trekking guide which was the only source for most of the sherpa to live with. His career took a turn when he meet american trekker during Kanchanjanga Expedition in 1996 who invited him to visit America. He is the founder of Sherpa Painting Services established in 2003,and also the main man behind the Sherpa Foundation.

Mr. Sherpa has recently received an award "Jana Sewa Shree" from the President of Nepal Ms Bidhya Devi Bhandari. Mr. Sherpa is the president of Sherpa foundation in America who helped to rebuild the houses of quake victims.